Release New Track ‘Slease’ and grab Single of the Week

This is the first new single False Heads have released following their impressive EP, Less is Better. From the very first few chords, it is abundantly clear that this is going to be a step forward. The sound is immediately rougher, more aggressive and stripped down, and, one might say, more confident.

Featuring a hammering drumbeat that sticks throughout the track and suggests a great potential to be a crowd favourite live. The track begins on an almost metal note, integrates backing vocals better than the band has ever done so far, and launches into a bold guitar riff that comes across cuttingly clean on the backdrop of the dirtier texture of the rest of the sound.

Vocalist Luke Griffiths has flirted with grunge suggestions in the past. Here his sharp, confrontational vocals are more reminding of a young Iggy Pop than of a Kurt Cobain. The track reads somewhat like a mix of the Stooges, Queens of the Stone Age, Incubus, and some suggestions from hardcore punk (some of the dirtier guitar sections are not that far from the likes of GBH) – but with a stark, in-your-face personality entirely its own.

All in all, this is a heavier, more mature serving from a band that is clearly moving forward in a brave direction, embracing their love of noise without devolving into chaos and proving that they’re not afraid to deliver a heavier punch. If there’s going to be an album on the horizon, we can hope it packs more heavy hitters like this.

That’s it for Single of the Week this week. If you think you have a single of the week on your hands then make sure you get in touch!

Keep up with the Single of the Week Playlist on Spotify below! 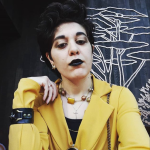 One thought on “False Heads – ‘Slease’ | Single of the Week”