The Blinders Deliver One of the Finest Debuts Ever with ‘Columbia’

“Welcome to Columbia. We invite you to open the gates to this new world and indulge in drudgery under absolute autocracy, served to you on a plastic tray. Johnny Dream skulks the streets as the factories fabricate their meat. The powers that be call for his head. Daddy told me it’s us and them”

From the ‘Territorial Pissings’ style statement of intent of opener ‘Gotta Get Through’, propelled by plunging guitars and singer Thomas Haywood’s rabid panting, through to the punk poetry of stripped backed closer ‘Orbit (Salmon of Alaska)’, The Blinders debut album Columbia is a sonic boom that can be heard and felt far and wide. And the reason why this has such an incendiary effect is because of the palpable sense of belief that the Doncaster trio have in themselves and in their “punkadelic” sound.

There’s no frilling around the edges, no dressing up or ornamentation, no hiding of the truth. There doesn’t need to be. This is the whole point of the album, telling it as it is, rooting out the injustices of our modern society, holding them to account and offering an alternative.

Haywood’s proclamation that “I Have Divine Right” on the Louis XIV quoting ‘L’Etat C’est Moi’ can be attributed to the Sun King’s affirmation of absolute power but it could equally be the venting of the singer’s own screaming desire. His calls for change to “break from your cages” on the Rolling Stones influenced blues jam of “Rat in A Cage”, to “free the boy, soon to be a man” on the impassioned speech that is “Free The Slave” offers an antidote to our current political malaise.

Throughout, Charlie McGough’s heavy duty bass resonates with this dystopian feel, bolstered by Matt Neale’s Olympian drumming, which comes straight out of the John Bonham handbook and which rightfully can to be termed as “epic”. It turns ‘Hate Song‘, inspired by Humbug era Arctic Monkeys  into a tribal frenzy and carries ‘Brutus’ along as if on the march to war. This track is the magnum opus on the album, combining Stooges style guitars with dark psychedelia to portray the universal truth of mistrust and betrayal.

Haywood’s lyrics tell how easy it is to gain the trust of the people, “We are all in this together, for the better”, selling the dream of a better world, only to reveal down the line that “there’s a slight small chance this maybe for the worse”. Guitars morph into discordant sirens as the calamity of the situation becomes apparent. All that’s left is hopeless wailing summoning in proceeding track “Et Tu’s” bouncing riff and with this conceit the betrayal is completed.

Contrasted with this, ‘Ballad of Winston Smith’, titled after the main protagonist in Orwell’s 1984, is a beautifully crafted track that defies the punk ethos of the rest of the album. Raw power is replaced with acoustic calm creating a moment of pastoral bliss, away from the technological glare of Big Brother. The Kasabian sounding glam stomp of ‘Brave New World’, another literary referencing track proves they can combine both melody with a decent indie hook.

Just would like to say thankyou to Paul Fassam and Caffy St Luce for the record, you are both stars – Alex 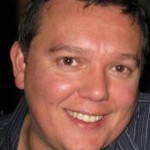 Music obsessive and father of three. Compensating for the toil of the daily grind by living a diluted rock star life through reviewing and gig-going. Brought up on the Eagles and Fleetwood Mac and forever caught up in the myth behind the legend.

One thought on “The Blinders – ‘Columbia’ | Album Review”