The charm of dream-pop duo Her’s is that you never quite know where you are with them, yet that dizzy displacement is what you came for. It’s 2018, and we have been given ‘An Invitation To…’: a succinct slice of wit as a title, heightening the supposition that here we have an album that is a confident debut; a statement of standing by their intent. Her’s take us by the hand into their kaleidoscopic world: jarring in its restlessness, captivating in its colour.

Her’s have been dogged, since their first collation ‘Songs of Her’s’, by parallels drawn between themselves and the hazy chimera of Mac DeMarco. Though they were once steeped in DeMarcian sensibilities, with swooping, twinkling guitarwork and drawling vocals as nonchalant as a backyard hammock, ‘An Invitation To…’ is a bold step away from that.

Her’s have tapped into the springs of originality, bravery and identity. ‘Harvey’ opens with a sleepy Parisian instrumental that kicks into skittering drum beats and gleaming synth that feels like you’ve been dragged back into a kitsch 50’s gameshow. They tamper with vocoder-distorted vocals, at once kooky and almost nightmarish.

Despite ‘Harvey’ being a frontal curveball, it’s an infectious track that is as silly as it is fun. In a genre that is meant to be light and free, yet weighed down by taking itself too seriously, Her’s have created something that feels authentic.

‘An Invitation To…’ is packed with melodic ambition. With instrumentals echoing the carefree jangles of 80s pop music in the likes of ‘Mannie’s Smile’ and ‘Low Beam’, their sound is sun-dappled, contrasted with slippery vocals; one moment baritone, the next minute soaring high, but always mocking.

There is nothing smooth about Stephen Fitzpatrick’s voice. The minute you are settled with the sound, he distorts it at will.

‘Don’t Think It Over’, one of the more visceral, sensitive tracks on the album. Its throbbing basslines from Audun Laading and shrug-of-the-shoulders mumbles is at odds with the lyrics that tell a story of budding paranoia: “Still you sweat / Over what she could be doing / It’s a simple threat / Is it only the beginning?”

The influences on ‘An Invitation To…’ are far more variegated than what you could imagine; Her’s show a refreshing irreverence for the confines that come with being a “dream-pop duo”. Wallowing vocals walk bravely into the post-punk territory in ‘She Needs Him’, optimism clashes with numb melancholia in a Joy Division vein.

Laading’s inclination for powerful bass is best shown in ‘Under Wraps’, which exudes a Brooklyn-born coolness as if it came from the same streets as The Strokes, just breezing along, rather than running at a hundred miles an hour.

This is a knock-out debut album. It’s hard to not be enamoured with its ever-changing style and sound – but above all, its imaginative sense of humour. It sounds beautiful and strange without the ostentation of other artists in their milieu. How could you refuse an invitation to Her’s? 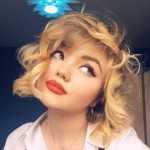 You know that feeling you get when you listen to some truly great music? When it stirs up a restless passion inside you that won’t settle until you’ve shared it, until you’ve told the world about the song they didn’t realise they needed? That’s the reason why I write: that, and because I’m no good at anything else. Contact: sophie.walker5@icloud.com