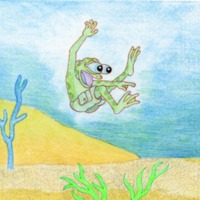 Having reviewed these before, they don’t really need an introduction, if you were unfortunate enough to have missed that post, hold your breath because it hasn’t disappeared, here’s the link BAYY – Aquarium.

After listening to their previous track, they leave you thirsty for even more, with their mouth-watering sounds that confuse you but at the same time achieving  to make you dancer in a rather unusual way. If you haven’t listened to the track, again don’t fear, here it is

If that one failed to make move in a way that you never knew you could before, than this one will push that boundary that bit further.

‘Doctor’ has this strange yet beautiful sound blessing this track throughout, it’s possibly the most soothing yet eerie sound that you have ever come across. It’s guitar work and melody is something that you would only expect from seasoned veteran that has been doing it for endless years, not from a band that’s just uploaded only their second track on soundcloud, but you hear it, and it goes against every convention you have for a relatively new band.  With lyrics that sound like they’ve been picked from a trippy dream, the song keeps you listening intently to hear what else he sings. The vocals may sound like a cry in woods with no one there to hear, but that makes you pay more attention, and keeps you revisiting the song to hear those lyrics which are distributed by some soft vocals.

One things BAYY proved in their first song was that they were capable of putting together a song that made you step back and appreciate, this only strengthens this argument, excellent work from and excellent band.