Before I start the post I would just like to say sorry for terrible lighting on the camera, my girlfriend just took her rubbish one as she didn’t want the other one to be battered, but still thankyou to her because with out her, I wouldn’t have these photos. If you’ve got any photos from the gig, please j get in touch I’d like to see em’, alex4563@hotmail.co.uk

I had the joy of seeing The Cribs this Tuesday, and I’ll be honest I’ve never seen them before (because before this I was a chav), but I’m a really big fan of theirs not only for their music but their whole indie ethos, they seemed to have stayed grounded regardless of the success, also they do go under the name of Witchita Recordings in the UK, in the US they’re under Warner I think, not entirely sure.

However they had a big gap between their last album and this one which is out now ‘In the belly of the brazen bull’ I did a review of the album and remember expressing how great it was, the gap was prior to the departure of Johnny Marr, undoubtedly one of the most influential guitarists ever. Also it was said that The Cribs were trying to do something a bit different and had to get used to being a three piece again, and I think they did that and paraded it on this very good album. 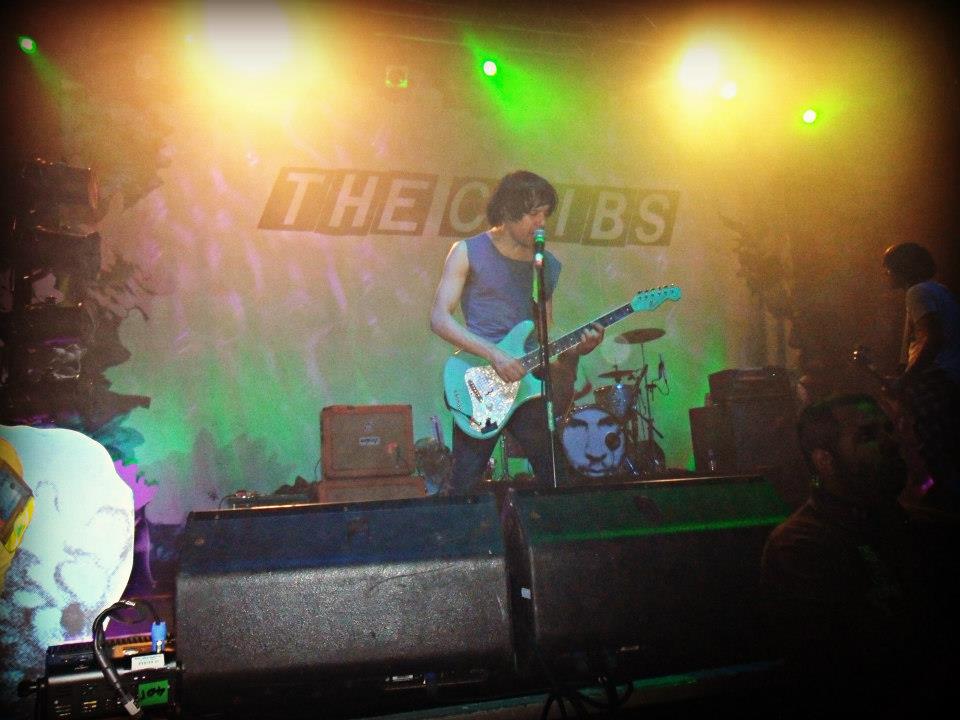 Right the gig, instead of rattling on I should talk about this breath taking, ear piercing and energetic rush of a gig. To put it in one word it was breathtaking, quite literally at the end I couldn’t breathe because of all the shouting, pushing and kicking that I had to do to remain alive (it weren’t that bad). I think the performance proved that they are probably one of the best if not the best bands around now, purely for the arsenal of songs they have, the energy they bring to the stage and Ryan Jarman’s immaculate style.

The gig started off fast, and it really didn’t slow down, with the likes of ‘Come on and be a no one’ and ‘Our bovine public’ starting us off. With the guitars sounding distorted and their microphones giving off  this slight buzz every time they started singing just added to the occasion, and how much they really didn’t care about the sound that much, because I know some bands perhaps would of stopped and tried to sort it out. You had the obvious crowd pleasers with ‘Hey Scenesters’ and ‘Men’s Needs’, but the songs that took the night for me was ‘Be Safe’, I love the track on the album but it was so much better live, as you had the AV backing track featuring Lee Ranaldo of Sonic Youth, and these blaring guitars and the back of it.

They also gave us the choice of ‘We were aborted’, ‘Don’t you wanna be relevant’ and ‘Leather Jacket Love Song’, personally I wanted ‘DYWBR’ but I got ‘We were aborted’. But I would of preferred ‘Direction’,  because that is probably one of the  best songs to go mad to, I was shouting for it almost every chance I could, but it didn’t come.

The main highlight for me in the gig was when Ryan Jarman’s guitar was playing up, and Ryan asked Gary to start singing a song for the crowd while they fixed it, and then he started singing ‘Under Pressure’ by Queen, and as soon as Ryan’s Guitar was fixed they proceeded an played the whole song, which I enjoyed.

Just one last thing before I wrap this up, Ryan Jarman is one of my favourite guitarists, performers and musician after that night just because of how he acted, the way he dressed and his guitar is fucking cool, oh and his haircut is off the radar it’s that good.